Hot spots: Traditional village, walking on sea path which is the second most southerly point of mainland Greece,majestic sea view.

Our walking tour starts from the small village Velanidia which located near to the tip of the peninsula of Malea, on the eastern side of Mount Krithina and looks at the Myrtoo pelagos & it is tucked in a gorge on the slopes of Mt. Krithina.

The cape of Maleas is a peninsula and cape in the southeast of the Peloponnese in Greece. To distinguish it from the cape, the peninsula is sometimes referred to as “Epidavros Limira” peninsula, after the most prominent ancient city located on it. It separates the Laconian Gulf in the west from the Aegean Sea in the east. It is the second most southerly point of mainland Greece (after Cape Matapan) and once featured one of the largest light-houses in the Mediterranean.

Walking downhill to dirt road will lead us to the the surface of the sea which from there starts beside the sea the narrow dirt path.On our left side we see the endless blue of the sea,on our right side we see rocks with wild goats looking at us from distance..Continue on with a lot of turns and with the scenary changing often from wild rocks beside the sea into vegetation & wild olive trees at an altitude 200m.Finally we meet the famous lighthouse which is first went into operation in 1883 and in 2006 was designated a listed monument. It is one of the oldest but also the most perfect one lighthouses in the Mediterranean.Since being restored with funds from the Ekaterini Laskaridi Foundation in 2009, it has been maintained by two lighthouse keepers.
Τhe way back is from the same path and we can visit near to village vellanidia one of the most beautiful & rare tourist caves in Greece: the cave of Agios Andreas, with 18 large and small chambers, total length 93 meters has rich decor of stalactites and stalagmites. 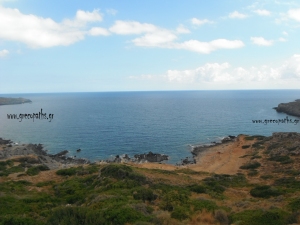 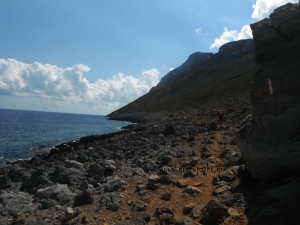 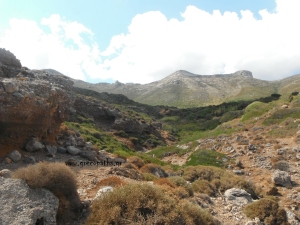 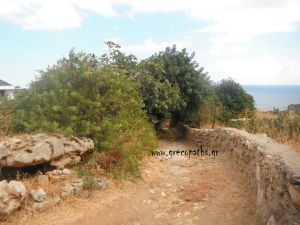 Hot spots: The unique phenomenon of petrified palm forest in Laconia, which appears to be one of its kind throughout the world, walking through the forest & across the coast line with breathtaking view.

The Petrified Forest of Agia Marina in cape of Malia will find the visitor about 18 km south of Naples,perfecture of Lakonia,municipality of Voies,8 km from the village of St. Nicholas.
Our walking tour starts from the isolated bay of sent Marina with titurquoise clear waters.There is a kiosk at the beginning of our walk which has some information about the protected area.

The palaeontologic studies which have been conducted show that the petrified tree trunks occupy an area which covers Aghios Nikolaos and Aghia Marina and reaches Neapoli and Elafonissos. The tree trunks date back to between two and three million years and they are indeed a rare find, since they were petrified by the sea and they were not turned into silicon dioxide by volcano ashes. Experts believe that during this time, Greece had a subtropical climate with a mean annual temperature of around 18OC with plenty of rainfall.
The palm trees which grew in the area extended right up to the beach. At some point, sea level began to rise and eventually covered the trees, which began to petrify and calcify as a result of the calcium carbonate. Later, the sea level dropped and marine organisms, such as shell-fish, remained on the trunks and were also found in their petrified form.
On our left side we can see all the mountain hill with the petrified tree trunks & on our left side is the endless horizon of the Mediterranean Sea.
Continue on the dirt narrow path has a lot of small turns & we walk across the coastline which has uphills & downhills with the highest altitude at 75 m. At its end we meet the picturesque chapel of Saint Eirini which we can take a break with a panoramic view of the sea.The path continues for a little bit more for an other one smaller isolated chapel of Saint Nikolas which that spot is the end of the path. 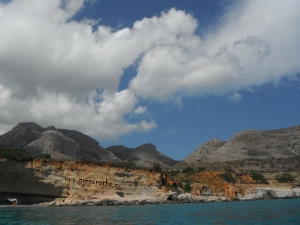 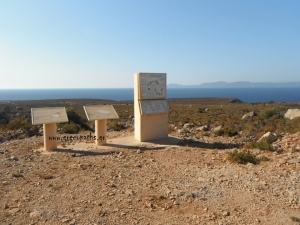 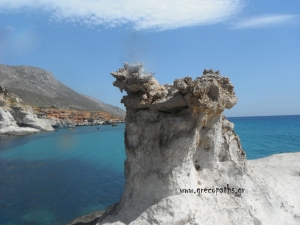